Let's Share Another Powerful Story About How These Hidden Secrets Were Revealed For Me ...

You know when you have "That Moment, that crystal clear memory of something that happened in your past that literally changes your life?

Mine happened on an ordinary day while we were doing that time-honored ritual known as Ignoring The Wishes Of My Parents by blowing off their recommended college choice for me.

Instead of staying close to home in SoCal, we were drawn to the film school program at a certain college in New Mexico.

One of my teachers at that school was a super cool dude in his late 20s his name was Chris Sherland. He was from L.A. music scene and you only had to hear a few notes to tell that this guy could absolutely shred.

Long story short, he wanted to teach me music theory. We were dreading it a little, to be honest, because we heard that this was the "necessary evil" of music education.

I prepared for the worst, but what happened next changed me as a guitar player forever...

This teacher sat me down and said, "Who inspires you?"

"Jimi Hendrix," I said, "because his playing crosses all genres."

He grabbed his guitar and played one of Jimi's signature licks. Then he explained what scale it was and, more importantly, exactly WHY it sounded so cool to millions of fans like myself.

It turns out that this music theory stuff gives you a roadmap to your audience's hearts by showing you what note and chord combinations provide the greatest emotional response for anyone listening.

How great was THAT? Now we could recreate that over and over again in countless other combinations!

Then he showed me a couple other aspects of music theory that, when tied to the Hendrix licks we liked, did nothing less than transform how we approached the guitar from that point on.

Seriously, it was like being handed the key to a vault of guitar secrets that we could access any time. If you have shied away from guitar theory for whatever reason, you have NO IDEA what you are missing.

It makes me a little sad to hear that people are not taught music theory the right way, because it's not only the "missing piece" for most players who haven't yet reached their goals, but it really is the only way you will ever be a complete guitar player.

If you take away anything from my story, remember this:

Learning music theory is not boring at least not when you tie it to your favorite songs, which is exactly how we teach it.

Here's How This Will Transform Your Guitar Playing Starting TODAY . . .

We have just poured everything we know about music theory into the most practical, useable, hands-on and just plain FUN course that will serve as maybe the most important stepping stone to your guitar journey.

WARNING: You could literally spend YEARS learning all the ins and outs of music theory. We studied it for four years.

You are going to love this video series course because we have cut out all the non-essential theory and only handed you the stuff you REALLY need to know.

In other words, you'll take the quickest possible route to mastery. We shaved years off the learning curve for you.

Here is how our Music Theory Survival Guide will finally get you over the hump:

Before We Get Started,

Another eye-glazing, head-nodding lecture that only covers USELESS technical definitions.

An "out of date" program that is hard to follow ... (This course was just completed this year)

Now Let's Briefly Cover What You Are About to Learn . . .

Learn a simple two-step method to get what's in your head onto the neck of the guitar. (And into the ears of your delighted audience.)

Immediately understand what other musicians are talking about when they're talking shop about music.

Gain an ability to come up with creative musical ideas on a regular basis.

Discover why certain chord progressions sound better than others -- and then take full advantage by applying that across the board in your playing.

Learn what notes you can use to improvise over certain changes (which is just one example of what learning music theory can do for your playing.)

Learn the exact emotional characteristics of all the best note combinations. This adds uncommon depth to your playing that sets you apart from the crowd.

Now You Can Get
Our Most Comprehensive Music Theory Course
Taught by Marty Schwartz
and Save $190!

Your special price: only $49

This course is the most practical, usable, hands-on and just plain FUN course that will serve as a crucial stepping stone in your guitar journey. Contains truly must-watch, "need-to-know" material!

We are talking more than FOUR HOURS of step-by-step tutorials, where you get to see close-up exactly how to duplicate these same sounds, move by move, finger by finger. Of course, you can pause and rewind as much as you need to, which is an advantage over learning from traditional lessons. Take it slow, get the hang of one technique, then move onto the next!

PLUS YOU WILL GET THESE 3 SPECIAL BONUSES

Here's What YOU Get Inside

The goal for this program is to take you from focusing on where to put your fingers to how use your brain to make the real magic happen on the fly.

PLUS YOU WILL GET THESE SPECIAL BONUSES

You get them for FREE when you order today

The modes have been used since guitarists started rocking out as a compositional tool and as a generator for solo improvisation. This course is Jam Packed with the Mode Licks that we personally use the most. This course will allow you to shortcut months if not years of experimentation and allow you to break out & create your own mode licks & blistering solo's fluidly up & down the guitar neck. 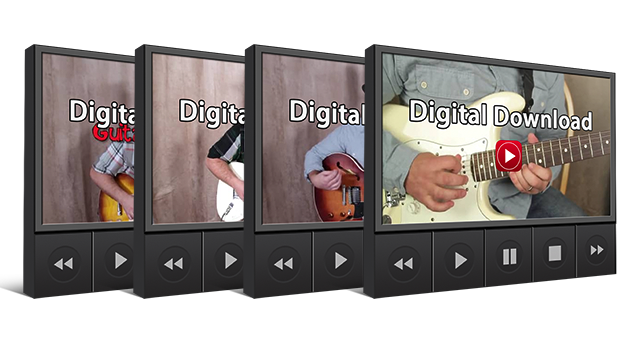 This "Blues Licks & Tricks" course contains over 140 minutes of Mega Valuable insider Blues secrets and tips. You will learn a bunch of awesome new blues Riffs and a whole lot more. Marty Schwartz breaks into his vault of licks that he has NEVER taught before. Blow your friends away with your newly inspired blues soloing techniques.

There is no better way to speed up your Music Theory comprehension than with our instantly available Music Theory Blueprint Ebook. Use this learning tool to guide and inspire you to break out of the box. Marty Schwartz details in tabbed format every screaming lick & sizzling riff that we teach you in the Music Theory Course.

PLEASE NOTE: This bundle doesn't contain any physical DVD products. This means nothing is shipped to you. All the lessons are in digital download format, which means you can watch them immediately online or download them for viewing on your computer or device.

You are only one step away from getting access our
Music Theory Survival Guide for the lower price of $49.

But you have to act quick because once that clock strikes zero, this page is going to disappear! And this offer will never be made again. Take advantage of this once in a lifetime deal before it's gone forever!

Let us make this easy for you. Just dive in and soak up all the learning material in this package for 365 days. Put the methods to practice and watch your playing get to the next level all while having fun.

Your purchase is unconditionally guaranteed for 365 days. No questions asked. Period.

Thanks as always for letting me share in your guitar journey.

Internet Explorer Out To Date

Safari Out To Date

Please update your Safari browser with a newer version (Safari 6 above) now!